Taylor, product management consultant for Poser, started working with Poser 4 in 1999 and sold his first digital product in 2000. Since then, he has worked to develop new rigging techniques in Poser, as well as on the software itself.

"Now I spend my time pushing the limits of what Poser can do. I guess that is what I've always done with Poser. My latest products introduce smoke and fire simulations into Poser without the need for scripts or troublesome plugins. I think there's a lot more to explore in this direction. These new tools were created using some of the new features in Poser that allow editing of channel dependencies inside Poser," he said.

During the hour-and-a-half-long webinar, Taylor will discuss his experiences and lead viewers through Poser 12's new features and all of its new advantages. The main aspects will be the demonstration of the new version of the SuperFly render engine, OIDN noise reduction, adaptive sampling, Optix support for RTX GPUs, the new auto installer, and Python 3. Taylor will also discuss:

Time for a Q&A will also be set aside.

Entry to the webinar is free, but a premium ticket is only $25.

The premium ticket includes a six-hour tutorial mega-pack (worth $165) by Taylor; Poser Clinic Volume 1: Answers for most-asked-about challenges in Poser; Mastering the Morph Tool; How to animate in Poser: A Complete Guide; an HD recording of this webinar event; and PDF magazine interview with Taylor.

While you're watching the webinar, you can download the latest Poser 12 update.

As we've noted before, we will continue to improve the software with frequent releases. The version on the Download page is always the most recent version, so if and when you feel like updating, head there for the newest and best Poser.

Those bug fixes are:

• Emissive materials now render in SuperFly correctly. They no longer render invisible
• Ctrl-click on button in Python Palette to start the editor set in the Poser Preferences properly loads file to the selected editor.
• SuperFly render progress bar is back to displaying both text and graphical status.
• SuperFly render settings and PostFX dialogs are now localized for German & Japanese. Note: Render presets for both SuperFly and FireFly are not yet localized.
• Cycles Texture Coordinate node in particular, reflections between Poser 11 and 12 have been fixed.
• Consistent Queue Manager local and remote rendering results between both Windows 10 setup and Win/Mac cross-platform setup.
• Post effects are now being applied to Queue Manager renders.
• Exporting rendered image file now saves out two versions. Any time PostFx is applied it saves the pre-postfx as _Original.
• Proper naming convention for image sequences with render setting auxiliary layers.
• Cycles Math and Vector Math nodes was improved and contain some new optional inputs.
• Average node is no longer available and has been converted to Maximum.
• Python scripts from partners have been temporarily disabled for upgrade to Python 3 & refactoring by RPublishing staff. 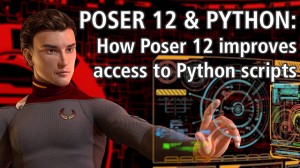 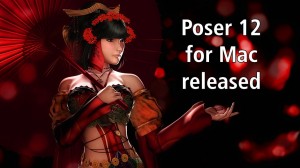 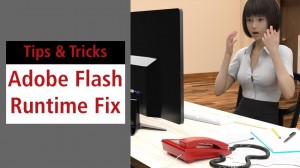 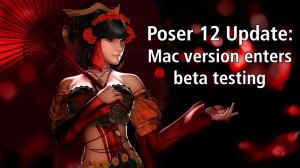 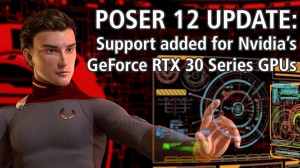 How to put Poser under your Christmas tree