Lost Cave & The Lair Scene Bundle Back to All 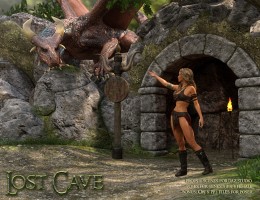 The Lair by DM is a new set of Poses & Expressions and Scene & Props for use with both DAZ Studio's Genesis 3 and 8 figures and La Femme 1 for Poser 11.

Lost Cave features five scene presets, eight props, materials, lights and cameras. It's all the things you need to create a fantasy scene.  Props included in this pack are Cave, Base, Post, Torch, Little Stones, and grass. It also comes with five full-body poses and their mirrored versions.