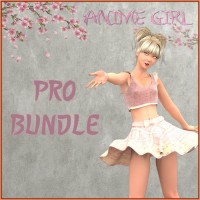 Anime is more than a genre. It's a diverse form of art that encompasses action-packed adventures, offbeat comedies, inspirational stories, and more with distinct attributes in terms of animation technique and character design.

The earliest animations that are considered anime were produced in 1917 with the characteristic style solidifying in 1960 Japan. Over the years, anime has grown to combine graphic art, characterization, cinematography, and other forms of imaginative and individualistic techniques. And now Poser introduces the next step in anime's evolution with Anime Girl for La Femme and Poser 12.

Anime Girl is easy to use as a morph for La Femme. To use the morph, simply inject them from the Pose Library and La Femme will be transformed into an anime beauty.

Developed by Blackhearted, nerd and Ilona for RPublishing, Anime Girl was created to take advantage of Poser's comic-style render features.

Along with the Anime Girl morph, Renderosity has released more than 50 3D assets to support your anime art from Rhiannon, Ilona, DragonFly, DM and more.

The Readme has instructions to fit all of La Femme's clothing to the Anime Girl. A Dev Rig is included for Anime Girl.

In addition to the Anime Girl for Poser, the following assets are also included to complete your Anime Pro Bundle.