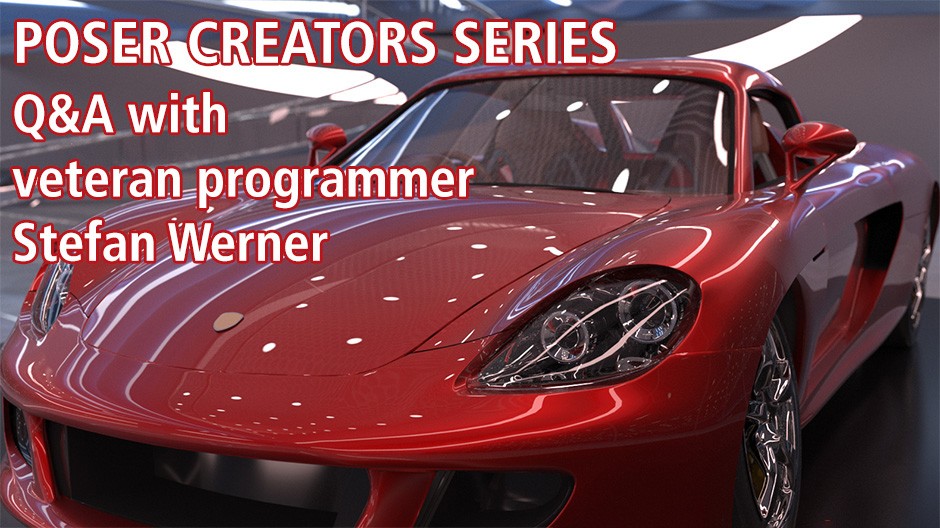 Bondware's continued investment in Poser continues with an expansion of the development team with the addition of veteran programmer Stefan Werner.

Werner's work on Poser started in 2001. Over his years at Poser, Werner has worked on NPR and PBR rendering using OpenGL, REYES and path tracing. He was responsible for embedding and extending the Cycles render engine into Poser, bringing Poser to the 64 bit and Cocoa age, integration of Kinect hardware, integration of wxPython scripting and other features.

Werner returns to the Poser team to help improve the rendering capacity of SuperFly and strengthen the development team. He is working on cleanup of outstanding Cycles issues, as well as research and development on bringing in "Cycles X Viewport," the instant preview rendering feature from Blender. In the meantime, the rest of the team is working on unimesh models for animation, games and VR/AR projects.

He answered a few questions about his past and future with Poser.

When and why did you first join Poser?

Stefan Werner: That was 20 years ago. I arrived from Germany in Santa Cruz in late September 2001 for a five-month internship. This was before Poser 5 came out. I was still in university, and just came from an internship at Egisys, Curious Labs’ German parent company at the time. I wanted to do an internship abroad and was into 3D graphics. I didn't know much about Poser though until I started at Egisys though.

How long did you work on Poser?

Stefan Werner: After the internship, I went back to the university, but kept working part-time on Poser. Around 2005, I started full time again and was part of the Poser team until late 2016.

In other words, I was there from before Poser 5 until after Poser 11.

That's a long time to work on a project. What kept you working on Poser for so long?

The core Poser team at the time was a tight-knit group, and it was a great work atmosphere. Poser is somewhat of a quirky product to begin with, and this was a workplace where you could bring in any crazy idea. We published a mock research paper about “Farticle Systems;” where else can you do that?

That sounds like a great environment. Is that what brought you back?

Stefan Werner: Pretty much, yes. I'm only full time on Poser in October, but I hope to have one or the other odd hour that I can work on it after that.

What are some of features that you've worked on over your time at Poser?

Stefan Werner: Most of the rendering features were written by me, such as FireFly’s global illumination, subsurface scattering or the integration of SuperFly. I also worked on bringing Poser to 64 bits and porting it to Cocoa on macOS - those aren't fancy features, but were substantial work nonetheless.

What will you work on now that you're back with Poser?

Some of the recent progress in Blender Cycles will be interesting for Poser users, such as improved subsurface scattering. I'd also like to improve its integration into Poser.