Poser Creator Series: Pushing the limits of Poser with Giana 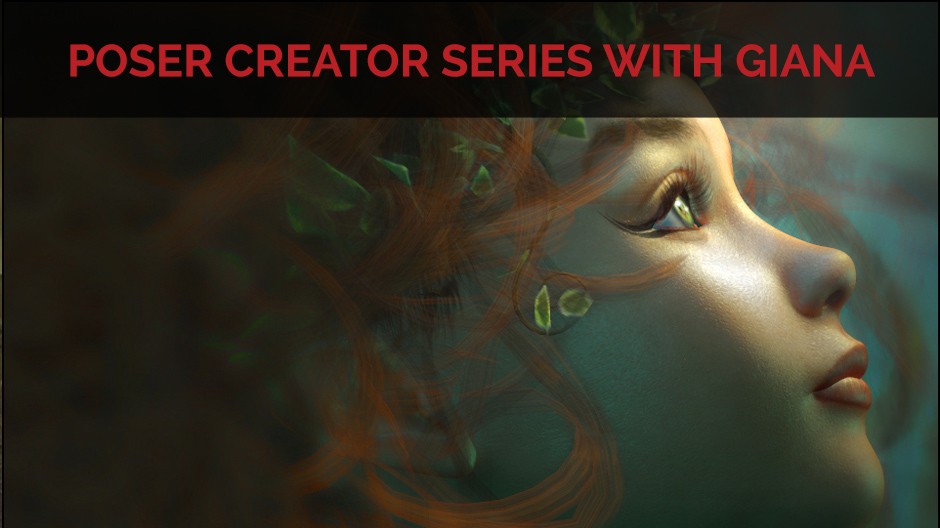 Poser's official marketplace Renderosity also boasts a thriving community of digital artists who share their creations and skills with each other.

One of the most skilled is Giana, who specializes in creating photorealistic renders with Poser.

She got her start 19 years ago with Poser 4. Given her history with the program, it's no surprise that she has an extensive runtime, which she likes to kitbash.

"My favourite thing is kitbashing outfits, so I'm not presenting the same thing that everyone has seen a million times over," Giana said, adding she kitbashes props, scenes and even hair.

She also likes to challenge herself by pushing the limits of Poser with her creations.

We wanted to learn a little more about her and her art. So we asked, and she answered. You can learn more below.

Poser: How long have you been using Poser and why did you start using the program?

Giana: I started playing with Poser 4 in 2000. A friend of mine gave me the boxed version because he decided he was not going to use it. I had just received an Adobe suite from a dear friend and family members (they joined finances in order to buy it for me) that included Photoshop 5.5, and I was just utterly fascinated by the program.

I hadn't had the internet for very long at that time, but I had been discovering art sites that sent my mind spinning and longing to create something wonderful and purely visual. I am more of an arts-and-crafts kind of girl, with no real schooling in Art, but I wanted to try something that wasn't in my wheelhouse, so to speak, to challenge myself, and off I went on an adventure that is still ongoing today.

Poser: When and why did you join Renderosity?

Giana: Renderosity was a site a stumbled across in my increasing obsession in regards to finding art online. That was towards the end of 2000, but I didn't officially join until April 2001. I felt overwhelmed and enchanted by the things I was seeing, all the beautiful pieces that people were posting - it was like visual poetry, and though I'm a pretty shy and private person, I finally worked up the courage to join and at the very least comment on works that moved me so.

I would spend hours just looking, and when a piece really spoke to me, I had a habit of just sitting quietly with it breathing it in - every detail, every nuance I could find in an image, I just tried to thoroughly absorb with all my senses.

I had a couple images I had created before joining, but I felt shy and insecure about posting anything (still do in fact), and it was maybe a month later that I finally did. And everyone was so nice and supportive, not because they all had nice things to say, but because some people offered up ways to improve, and that was just so cool!

Poser: What inspires your creations?

Giana: Like many people, I find a lot of inspiration from music. I also draw inspiration from wordplay, poetry, personal conversations and just my own feelings in general. When I was painting more, inspiration came from challenging myself, that eternal question of 'Can I?' - can I draw this or that, can I create this kind of lighting, or that kind of outfit, or a mood.

These days, I find my inspiration still draws upon that question, but at this moment in time, the question goes more towards the technical aspects, like creating lights, or a nice scene, or an interesting camera angle. I'm trying to get back to more emotionally driven pieces, but I'm still trying to understand Poser a bit better first.

Poser: What is your favorite thing to design?

Giana: If I am painting more, my absolute favourite thing to design & paint is jewelry. I love intricate things, and while I'm not the best at painting things, I feel that painting jewelry is maybe what I do best and feel the most confident at creating.

When using Poser, like most long-time users, I have a huge library of goodies to play with. My favourite thing is kitbashing outfits, so I'm not presenting the same thing that everyone has seen a million times over. Kitbashing hair is also fun, but can be a bit trickier depending on the models used. And I like mixing scene props together, too. I'm just now getting more into scene, or set, design, as I have been doing predominately portrait work for several years, and I'm trying to move a little bit beyond that. Wish me luck!

Poser: What's the best thing (or your favorite thing) you've created by asking yourself "Can I ...?"

Giana: For me, that's an extremely tough question. If we are speaking in general, then my answer would be the three long-term friendships I have with some very special people.

If we are speaking in terms of a more widely acceptable definition of 'art', I don't have any 'bests' or 'favourites', per se. I've painted a few pieces of jewelry that I ended up liking, and there are small bits of a few images I've created that I think turned out OK, like lighting around an arm, or the flow of hair, that type of thing.

I'm more of a realist than an optimist, but I would hope that the best thing I create is whatever I'm currently working on. I'd like to think, and hope, I'm growing and progressing in small ways each time I challenge myself. This whole process for me is still very much a work-in-progress, from the images I fumble at doing to my entire perspective about myself, so I doubt I'll ever have any true 'bests', and that's okay.

The image 'brust,' originally titled 'to reign in hell,' was a fun challenge. It was originally started in 2006, using Poser 4, Vicki 3 and Photoshop 5.5. I laid down some basic ideas, put it away and forgot about it.

Flash forward 10 years later, and I find it buried in some folder, and decide to try to 'do something' with it. I no longer had the PZ3, but I wanted her to be sitting in a different chair, so I rendered a different chair in Poser 10, and did some compositing in Photoshop 5.5 (yes, I still use this version). I then cut apart and repositioned parts of V3, put them back together, and painted over her entirely. Then there was more painting for hair and horns, clothing, lighting, and whatnot - lots of challenges throughout: and here, I can say that I was rather pleased with the horns as I had never done anything like it before, wasn't sure I could or how to begin.

I also had good advice along the way from two friends that truly helped and kept me encouraged when I was wanting to trash it all. Maybe THAT is the best part.