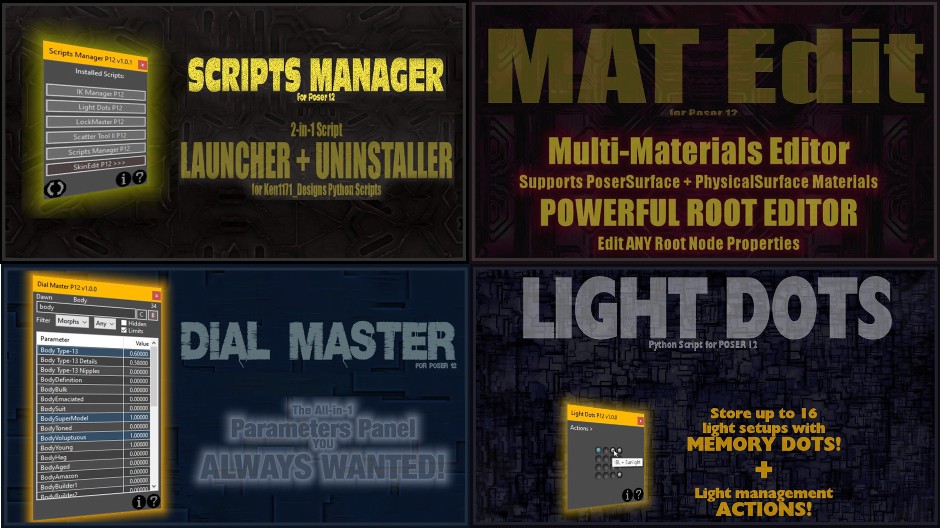 Since it was introduced in Poser 4, the Python programming language has allowed Poser users to automate and customize their experience. One of the most prolific Python script developers has been Ken1171_Designs. He has scoured Poser's official forums on Renderosity and developed four new scripts that can change your Poser experience for the better.

Ken1171_Designs is most proud of Script Manager for Poser 12, which he released earlier this year. This is a centralized, fully dynamic scripts launcher menu for Ken1171 Designs scripts, and also a one-click scripts uninstaller, he explained.

"There are many reasons why it was created, but one of the main ones was to handle the new way Python scripts are installed in Poser 12," he said.

With improvements to Python in Poser 12, users no longer need to download ZIP files and extract them over the main runtime.

"Poser 12 has introduced a much easier, quicker, and improved way to install Python scripts that is different from how people were used to for the last two decades," he said. "Now we can install Python scripts directly from the embedded store in the Poser library, under the 'Purchases' tab, 'Renderosity' option."

Then scripts can be installed automatically into your runtime and are accessible through the "Scripts" menu. But if you manually install the scripts, they will be placed by default in the "Downloads" runtime.

"When you do it this way, you are also given the opportunity to choose a runtime of your choice. This is all new, and I am taking the opportunity to explain it here with hopes to clarify the new scripts installation process in Poser 12," he said.

Because Poser 12 changed the way Python scripts are packaged and installed, Ken1171_Designs was able to create Script Manager, which automatically scans your entire runtime for scripts installations, and dynamically locates your installed scripts, and creates a launcher list containing all installed scripts you have purchased from him.

When you use Script Manager, they all show in the same place even if you have automatically and also manually installed scripts.

"It can also help identify when the same script was installed at different runtimes (duplicate installation) if you see the same script name listed more than once in the launcher list. In this case, you can use the script to remove the duplicate ..." he said."Hence, Script Manager is not just another scripts launcher - it's a comprehensive tool that takes advantage of the latest Poser 12 features. It also offers a quick and easy one-click script uninstaller, probably the first one ever made for Poser."

Since releasing Script Manager, he has also released MAT Edit for Poser 12, Dial Master for Poser 12, and Light Dots for Poser 12. These three scripts allow users to edit multiple materials at once, easily adjust dials, and creates additional memory dots and labels for them all, respectively.

He was kind enough to explain these scripts and how they can help every Poser user.

What is MAT Edit for Poser 12?

Ken1171_Designs: One of the biggest chores we have when editing materials in Poser has always been the fact that only a single one can be selected at a time. This is a general thing with Poser for basically everything.

MAT Edit for Poser 12 finally allows users to select and edit multiple materials simultaneously. Not only editing, but also copy & paste can be performed over multiple materials, or even the entire figure or prop at once.

For all customers who have enjoyed my greatly automated "SkinEdit" script, which offered a one-click solution for converting old legacy figure materials to SuperFly, MAT Edit is the general materials editor that can handle everything.

Traditionally, the only way to apply multiple materials has been to load them from the library, which is a rather slow process. With MAT Edit, anything can be edited, copied or pasted in any number, and much faster than loading from disk. In addition, copying materials with MAT Edit breaks them down to raw data, which uses less memory than keeping copies of the entire materials in memory. In other words, the script breaks down materials into small bits, and then rebuilds them back into materials when pasted, which is many times faster than loading presets from disk, and also uses less memory.

There are a number of automations the script can perform that can reduce what would be rather tedious and repetitive tasks down to one-click solutions. Examples include resetting, or cleaning up selected or all materials at once. Cleaning up includes options to remove all disconnected (orphan) shader nodes, or instead, remove all shader nodes, leaving only texture maps, automatically reconnecting them back to the root node(s). Other automated tasks include auto-fixing texture maps gamma value across selected materials, or the entire figure or prop with one-click, replacing texture maps across multiple materials, auto-fixing legacy "gradient bump" connections, or even changing image map shader node's filtering method across multiple (or all) materials with one-click.

MAT Edit can also bring root nodes back to the origin, and cascading all connected shader nodes next to them. There are also tools to expand or collapse shader node input lists and previews across multiple materials simultaneously, filtering by root nodes, regular shader nodes, or all nodes. To make the workflow more intuitive, you can optionally enable auto-selection, which keeps your selections synchronized with your Poser scene. This includes selecting figures, props, or materials.

For more advanced users, MAT Edit allows rewiring shader node connections to the root node(s), be it by copying shader connections from specific root node inputs, or directly from existing shader nodes (if they are shared). The script automatically scans the selected materials to figure out which ones are shared. Similarly, MAT Edit copy & paste reacts intelligently, depending on what was selected when copied, and what (and how many) was selected when pasting. Different things automatically happen depending on the case.

What is Dial Master for Poser 12?

Ken1171_Designs: One of the most requested features from the Poser forums has been the ability to control more than a single dial at once, and another was having a search box to quickly locate dials by name. Dial Master provides all of that, plus we can also further filter results by dial type, and/or by dial value. This allows things like listing only the currently used dials, which is very handy. Those were my main motivations to create Dial Master - to reduce frustration, and increase productivity.

Another factor is when we spin a dial, but we can't get the exact value we want because the parameter value changes too fast. Dial Master remedies this situation by offering modifier keys we can press while dialing to control the speed in which the values change. Poser calls this the dial's "sensibility." The script offers four different sensibilities by pressing the modifier keys in real-time, allowing the exact precision we need for each situation, and without affecting the dial sensibility properties. This can be applied to any number of dials in real-time. It dynamically changes the dialing precision while the modifier keys (SHIFT, CTRL, or ALT) are held down.

There is also the case where we want to set a number of dials to a specific value (min, max, zero, or default value), and Poser forces us to do it one at a time, which can be tedious and frustrating. Dial Master allows selecting all your desired dials at once, and then setting their values to one of these settings with one-click by using SHIFT (max), CTRL (min), and ALT (default) modifier keys. Right-clicking the selection resets dial values back to zero at any time.

The parameters list can be used as dials, by dragging the mouse over the selections like you would with the Poser dials with 4 dynamic dragging precision levels, except that now you can select as many as you want, and dial them all at once. There is also a choice to double-click a parameter to directly type in a value for it when needed. And to help when working with figures, there is a button dedicated to selecting the BODY actor, which is where the most important dials are usually placed.

When it comes to increasing productivity with Poser dials, Dial Master offers all the related features I have always wanted in a single tool. The interface is small, simple, and minimalistic, taking much less space than the Parameters panel itself. Being a native Poser panel, it can be docked anywhere you like to fit your workflow, and it will remember its size and position next time we run it. Integrated PDF manual button included for when you need more information on-the-fly.

What is Light Dots for Poser 12?

Ken1171_Designs: Light Dots is a script that mimics Poser Memory Dots, but it is dedicated to lights, and brings a number of improvements. At a first glance, the interface may look identical to regular Memory Dots, except that it offers 16 slots instead of 9, and there is an "Actions" menu on the top. If you are familiar with how Memory Dots work in Poser, you already know how to use Light Dots off the bat. However, we can add a caption to each dot to help us remember what it stores, and we have a collection of light management tools from the Actions menu as a bonus.

Just set up your lights, or load your favorite ones from the library, and click an empty dot from the 16 available slots. This saves all lights from your scene with one-click. If you CTRL+click the dot, you can optionally add a tooltip caption to it that shows when you hover the mouse cursor over it. If a caption already exists, you are given an opportunity to edit it. This can be helpful when there are 16 slots to store light presets to, and it's easy to forget which one is which. Just type a description to it, so later you can quickly remember what they do.

But perhaps one of my favorite action automations is the ability to rename all current "shadow lite cams" to match their respective lights on the scene. This feature has been repeatedly requested in the Poser forums for over a decade, and it's now automated with one-click in Light Dots. For those who like looking through "shadow lite cams" to visualize the effects of lights in Poser, this script finally makes it easy to identify what shadow lite cams belong to what lights in your scenes.

So Light Dots is like Poser Memory Dots on steroids. It does the expected, and then some more to improve quality of life. The interface is small and familiar, and can be docked anywhere in Poser. Integrated PDF manual button included for when you need more information on-the-fly. 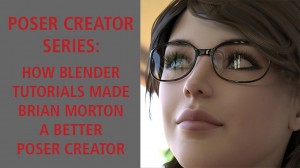