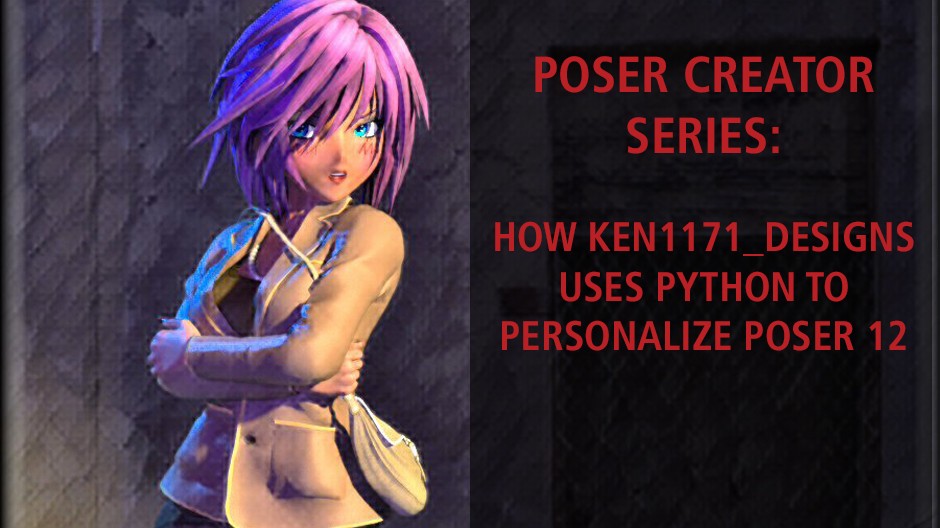 Trained in Computer Science and computer graphics, Ken1171_Designs can see the limitations of software and how to get around them.

"I could either complain, or do something about it," he said about creating Python scripts for Poser Software.

One of the previous limitations in Poser was an inability to protect Python script writers from online piracy.

"That’s one of the reasons why it was no longer viable to make scripts for Poser. In any market, if vendors cannot make a profit, they simply have to move on, and that’s what we see happening right now," he said.

But now Poser 12 has new improvements to how Python scripts are both protected from piracy and how they are installed into the software.

These improvements were accomplished by adding automated installation support. Now, Python scripts will appear in the Scripts Menu after installation. The improvements also give Python developers the ability to verify that a Poser user has purchased the product before the executing app, as well as includes limits to the number of times a script has been downloaded and installed per purchase.

Ken1171_Designs said this means now he and other Python script writers are ready to create scripts that push the boundaries of Poser, as well as automate tasks.

How long have you been creating digital art, and why did you start?

I started around 2001, but professionally only after 2004. I am from a generation that saw the very first video games in those pre-PC computers, and I fell in love with computer graphics ever since. When I went to university, I wanted to study Computer Science, but the course didn’t exist in my town until years later, so I went to Electrical Engineering instead.

About four years later, they offered Computer Science, and I quit engineering one year before graduation to start over from scratch in the course I really wanted. I got bachelor's and master's degrees in Computer Science, with a major in 3D Computer Graphics, and I couldn’t be happier while doing it. It was the perfect marriage between science and art. Computer graphics is one of the five sciences we study there, and it was, of course, my favorite. It has been decades now, and as computer hardware becomes more capable of rendering 3D graphics, the more I love what I can do with it.

Computational Algebra and Artificial Intelligence are two other fields of Computer Science, and nowadays, they have been merging with computer graphics in ways never imagined before. Poser 12 is now accelerated by artificial intelligence to make Superfly renders so much faster than it was possible in Poser 11. That’s computer science making our lives better every day.

What inspires your models?

After having lived on over five continents on this planet, I have accumulated a wide cultural spectrum, but the side that grew deeper roots in my infancy was from Japan, where my father came from, and where I have lived, worked and studied for part of my early years. Nearly everything I make is influenced by my Japanese side, and I can’t help it.

I first started doing 100% Japanese-style Anime, but after three-four years of it, I thought that was limiting my artistic expression too much, and I started experimenting with other styles. Realism is not for me, though. I will always stylize things one way or another.

When Square Enix released their “Final Fantasy: Spirits Within” movie, it was the first time they tried to go 100% realistic, but it has spooked out people with “Uncanny Valley” effect, and from that point on, they decided never to go realistic again. Then they closed the office in the U.S., and went back to Japan. That’s when they came up with a new stylized character design that was too real to be cartoonish, but not real enough to look like real people. That has clicked with me ever since, and it’s the style I have aimed for in my renders. It has become my main inspiration on the character style side.

Maybe this is common among artists, but I went through several phases, where I liked designing different kinds of things over time. I have started with props, writing my original music, creating animations, making lots of web games with Flash, then making stylized hair, then clothing of all kinds, then body sculpts in several different proportions and shapes, and more recently, creating new automation tools for Poser with Python. I’ve loved doing all of it, and I was more successful with some things than others, but I strongly believe that things I have created while having FUN will become products people will like the best.

I primarily make things for myself, and hope others might like it, too. It has to be something I really want, and if others are not making it, I have to make one myself. That’s how I got started with body sculpts for HiveWire's Dawn, because nobody else was doing it, and I really wanted it. I could either complain, or do something about it. I didn’t even know where to start, but the more I did it, the more fluid it became. I didn’t know how far I could push the mesh, and I was surprised Dawn would survive everything I made for her.

That’s what started my “Body Type” series for her, where I made a wide variety of body shapes and proportions of all kinds, where each body design was unique in its own way. But my current passion has now shifted to making Python scripts for Poser 12.

When and why did you start programming in Python?

Being a computer scientist, programming is part of my background. But I had never used Python until the end of Flash on the web. I was looking for a substitute, and then Python came along with the current rise of artificial intelligence. Even though that was recent, I didn’t know Python would explode in popularity around the world like it did. However, it is by no means even close to be comparable to the power of Flash with ActionScript 3, so it won’t replace Flash, but it has become a thing on its own merit.

Python is a very strange language in several aspects. On one hand, it is one of the fastest to program with, but on the other, it does not follow the recommended computer science guidelines for how a programming language should be designed. It allows for things that are considered “bad practices” in the industry that have caused plenty of trouble in the last few decades, where Python doesn’t seem to take a hint from that.

But in spite of the design flaws, Python is a very powerful language for its simplicity and rather unorthodox ways of dealing with things. Like some of the best video games out there, it is easy to learn, but hard to master. It refuses to follow industry standards, and does things its own (odd) ways. It’s a language like no other I had seen before.

When Poser 12 was announced to upgrade to Python 3, none of the existing scripts from older versions would work on it, and here again I could either complain, or do something about it. I really wanted more Python tools for Poser 12, but nobody was making them. Sounds familiar?

By then, I had already created the Scatter Tool for Poser 11, which had become a top seller because it has shown people things they didn’t know they could do in Poser. Instead of making things people wanted, I made something they didn’t know they wanted. I am now creating scripts exclusively for Poser 12, where three of them are already in my store at Renderosity, and six others are in the making. Some of them are to increase productivity when working on Poser scenes, while others will present a new way of doing things like it was never done before.

I keep development threads updated at the HiveWire3D forums (they are open to the public), and more recently I have been trying to echo those at Renderosity as well.

How do the changes in Poser 12 that protect Python scripts help creators like you?

That’s a good question. There were many who came before me in this field, and we have to learn from their experience. How come we used to have so many Python developers in the Poser market, and now they are all gone? What happened?

Based on feedback from veterans like Phil Cook (PhilC), what happened was piracy. He claimed “one would buy the script, and then others would download it from pirates.” Video games keep being plagued by piracy, but it survives because it’s a huge industry out there. Conversely, the Poser market is small in comparison, so the effects of piracy are much more severe here, especially when the Python scripts niche is even smaller within the Poser market as a whole. So that’s one of the reasons why it was no longer viable to make scripts for Poser. In any market, if vendors cannot make a profit, they simply have to move on, and that’s what we see happening right now.

This is where Renderosity came up with the idea of protecting Python scripts if they were purchased from their store. It is a clear attempt to make this section of the market viable again, and attract Python devs to explore this market. This is where I came in. My “LockMaster” script for Poser 12 was the very first to implement this protection, and I have worked closely with Renderosity to test and resolve any issues that pop in the way. There were some bumps in the beginning, but now things are finally starting to fall into place.

It is not just the script protection that is new in Poser 12. Renderosity has also completely redesigned the way Python scripts are packaged into ZIP files, making it much easier for customers to have them installed, comparing to how it was in the past. It was so easy for people to install scripts incorrectly before, but now the entire process has been simplified, so all those Python script installation issues will become a thing of the past.

I now have three scripts using this new packaging and protection in my store, and there are many more to come. I am spearheading this with Renderosity, with hopes to bring Python devs back to Poser. I understand it may not be possible to stop piracy completely, since nobody could ever do that, but we can make it harder. This is a new renaissance for Python in Poser, and I am hoping for the best.