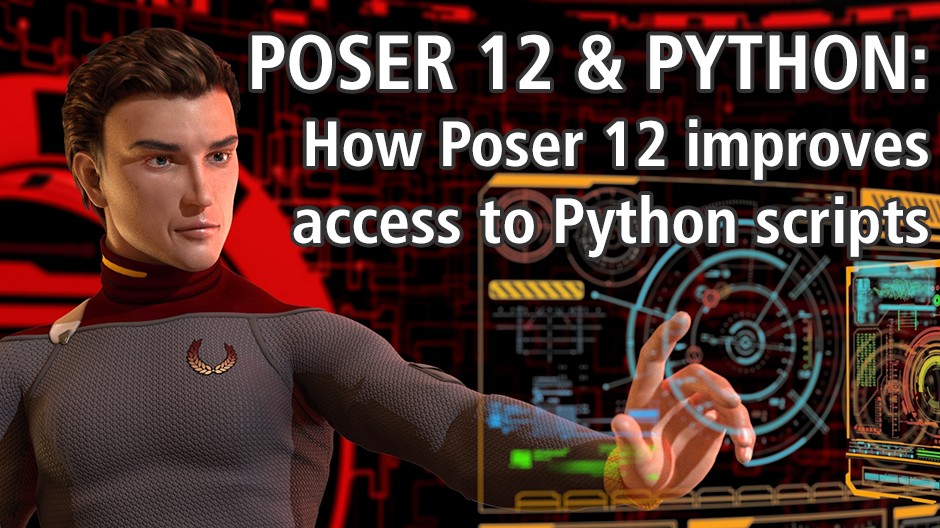 Beginning with the release of the Poser 4 Pro pack in 2000, Python scripts have been an essential part of the Poser experience, but the use of user-generated scripts hasn't come without issues. Poser's dev team has worked with Python developers to fix many of these known bugs.

Over the years, Python has allowed Poser users to automate and customize their experience. These useful additions can automate the boring stuff, but also make things possible that are not directly doable in Poser. For example, Python scripts can convert materials to poses or vice versa, delete lights, quickly switch cameras and more.

The issue with these forms of distribution is that it makes pirating the scripts very easy because of an inability to verify the status of the purchase. This limited the opportunity for Python developers to safely sell their intellectual property in content stores, like Renderosity.com. This resulted in more Poser Python scripts submitted to FreeStuff than sold in the 3D content marketplace.

With Poser 12, our dev team worked with Python developers to implement protections for Python 3 scripts.

These improvements were accomplished by adding automated installation support, which works the same as content products under Purchases tab. Now, Python scripts will appears in the Scripts Menu after installation. The improvements also give Python developers the ability to verify that a Poser user has purchased the product before the executing app, as well as includes limits to the number of times a script has been downloaded and installed per purchase.

Thanks to these improvements, we are starting to work with more Python developers and the first Poser Python app products have been submitted for testing at Renderosity.com before they are released. Poser Python app master developer SnarlyGribbly is also working to adapt his older scripts to Python 3.

RPublishing purchased several popular scripts from retired Renderosity vendor Netherworks and is working with other developers to adapt them to Poser 12 and Python 3.

These scripts include Creator's ToyBox, Camera Panel Plus and Scene Toy Pro. The Creator's ToyBox script is a Content Creation Assistant that corrects and optimizes files for distribution by freshening up old content. Camera Panel Plus is a flexible toolbar that allows users to easily switch between Poser’s camera. It features customized zooming, panning and rotating the camera (separate from Poser wheel zoom), Camera Presets , Amazing layout and customization and support for multiple Poser rooms. Scene Toy Pro is a fully featured scene navigation and manipulation tool that is packed full of amazing and useful features that will enhance and accelerate how you work and create in Poser. At a quick glance, it resembles Poser's Hierarchy Editor. Figures, Props, Lights, Cameras and Deformers are shown in a TreeView structure. Branches can be collapsed and expanded. Selected items are selected in Poser and if an item is selected directly in Poser, it is selected in Scene Toy Pro.

The first app releases are expected by mid-March at the latest on Renderosity and PoserSoftware.com soon after.