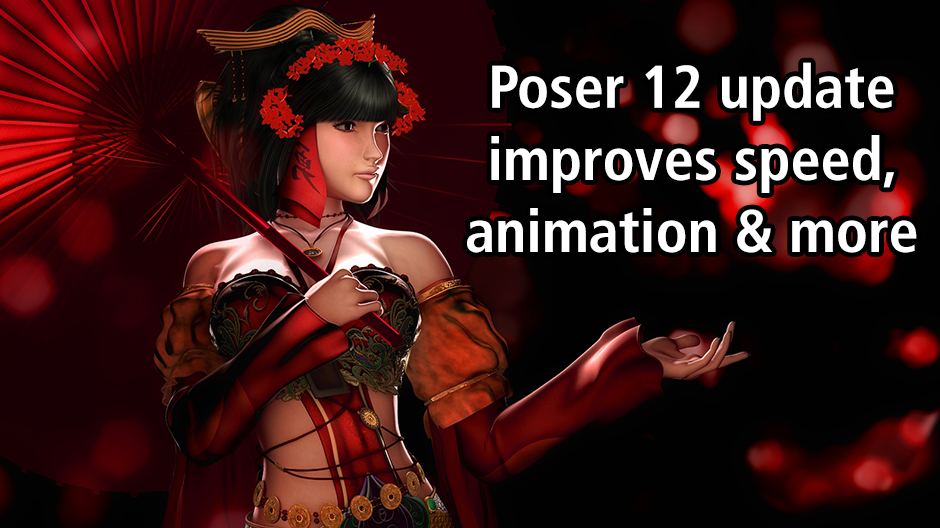 The newest update for Poser 12 contains a host of improvements and bug fixes, including improvements to general speed, animation, the Python API and more, according to Bondware Inc., Poser's parent company.

Poser 12.0.619 is available for download on the Downloads page on PoserSoftware.com.

"Most of these address long-standing issues in the Poser code base that have been fixed and are being provided at no charge under our "Early Access" program," Bondware President and CEO Tim Choate said.

Some minor fixes include fixes to the Japanese and German keyboard localizations as well as properly loads default translations for those users.

"In some ways, these represent final polishing on the Python 3 upgrade and multi-language support in Poser," Choate said.

"Some clients use NAS devices to store large content collections for personal or team use.  Significant effort went into ensuring that Poser support the UNC file paths used to access these devices," Choate said.

We did this by fully supporting UNC paths for content folders.  This allows Windows 10 to write to libraries, runtimes or locations specified by UNC.

The new release has many changes to help improve the speed of Poser 12.

Significant work went into improving Poser performance in this release, including adapting to Windows 10 changes that slowed performance for graphics applications. For example, there are many user interface changes that address slow-downs with Windows 10.

But there was one change that stands above the rest in improving speed.

We've also helped speed by increasing the default max size for texture cache from 500 MB to 1 GB on new installs. If you have existing settings, you have to change those manually. Here's how to do that.

Poser has a set of animation tools that were fine-tuned in this latest release.

"These are specific items, but significant work went into tuning the animation tools in Poser," Choate said.

First, we increased Make Movie frame range input text field. Then we fixed a bug that lost the selection after deleting keyframes in the Animation Palette. Finally, the FBX exporter is no longer hard coded to 30 fps now fixed to set the frame rate properly.

Improvements to the Poser-Python API include a way to obtain symmetric copy of a weight map, the ability to clear individual Python Callback events from Poser, and adds access to actor locking states in Python. It also gives access to Poser functions handling colon separated HFS format paths.

• Open GL Comic Book Preview no longer clips to black adjusting the camera hither/yon parameter.
• Scaling figure no longer causes conforming to fail near joint singularities.
• Library palette UI improved, no longer opens with malproportioned panels.
• Fixed display issue with Preview window on Windows 10.
• Fixed startup select to "Body" when a main figure is loaded.
• Library Search no longer returns duplicate results in certain cases.
• For the selected default scene on startup, whatever actor you set via pickActor shows up as the selected actor.
• Fixed broken deformers (wave, magnet, etc.) object paths when library search set to NONE.
• Scene collection no longer fails to find core content.
• Fixed crash on launch when library search set to NONE and opted not to select missing camera and lights pro script.
• Adding a folder to favorites when item list is selected no longer fails.
• Refreshing the content library during a Included, Renderosity, or PoserSoftware purchases install keeps you locked into that channel, even when reloading the library.
• Poser 12 Splash screen copyright dates updated.