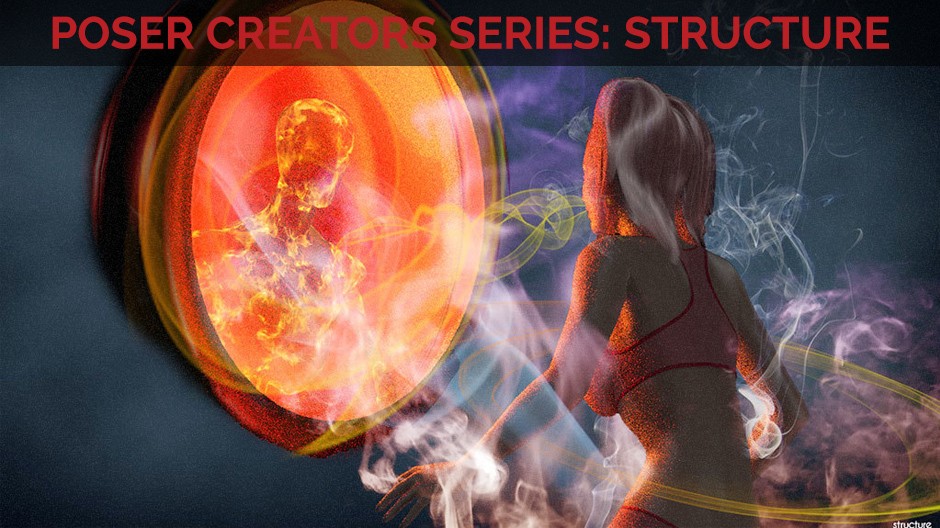 At Poser Software, we try to make sure our users get the support they need and deserve.

We have six people who answer support tickets in addition to their regular duties.

Most of the support requests are to reset the activation limit or reinstalling the new version since the seminal program moved to Bondware from Smith Micro. But the hardest and most complicated Poser support questions go to Andy, a.k.a., Structure. (We've heard from his wife Giana about how she uses Poser to create art.)

"We send him the issues that no one else can fix," said Jenn Blake, Poser’s Content Manager & Beta Team Lead. "He takes the time to chat with users who have support questions and find out exactly what's wrong. He has even done screen-sharing to make sure that the program is installed properly."

Structure learned the ins and outs of Poser and how to write Python scripts after he was diagnosed with cancer in 2012. Python scripts are used to automate certain tasks, like toggle lights, send to zero, item hide, and so on. You can find Structure's Python scripts in his FreeStuff.

Here's a little more about our support star, Structure.

Structure: My Name is Andy, I am structure on Renderosity, my hometown is a little place in the UK called Nelson. I think my favourite software for creating is a combination of Poser and Photoshop.

I started in the mid-late '90s as an avatar painter in a chat community called Excite where people would bring a photograph on which they wanted their name, for me it was not enough to just put their name on it, I wanted to make it look unique for each person. The maximum size when I started was 52 x 104 pixels. Imagine how difficult it was to paint on those and make them look unique!

I started using Poser 4 around 2001, but I was not ready to move away from 2D art, though I dabbled occasionally.

What's your role with Poser?

Structure: My role with Poser... well I would have to say that right now, my role is support and testing. I don't get much time to create, I love to write Python scripts and make Poser do what I ( and others ) need.

What is your favorite thing about support? What's the most common question you get asked?

Resolving issues is probably the best part, knowing that you got somebody's issue fixed so that they can continue to use their program of choice. The most common question by far has been "My Poser stopped working - too many activations, what do I do?" (or some similar wording).

If you get this warning, you need to update to the newest version for free. Download it here.

What is one thing you wish you knew more about?

Structure: Poser on the Mac! There are customers using Macs whose issues I need to go and research because I do not use a Mac. Knowing more about those would be beneficial to both myself and the customer.

What is something people would be surprised to know about you?

Structure: I was diagnosed with stage 2 cancer in 2012, the chemotherapy regime I was prescribed was brutal and it damaged my memory; my oncologist called it chemo-brain. I started to teach myself Poser python as a way of holding onto things. It really helped me to be able to retain things, and not just from Poser or Python but also in everyday life. Though my memory is still damaged, I believe it is not as damaged as it could have been without something to assist in recollection.

Tell our readers more about scripts in Poser. What do they do?

Structure: Scripts in Poser are very useful additions, automating some of the boring stuff that you need to do in Poser and also making things possible that not directly possible in Poser. Examples would be, converting materials to poses or vice versa, deleting all lights, quickly switching cameras. There are many things that Poser scripts can help with.

And what's the most commonly requested script for you?

Structure: The most common question, or rather, the most commonly requested script for me has been, "How can I delete all the lights in my scene without deleting them one at a time?"

So, how can I delete all the lights in my scene without deleting them one at a time?

In Poser 10+, you can use a script called "deletelights" under the scripts > utility menu. In older versions of Poser, you may need to download a Python script to do the job. I know there are a few on the internet there may even be one or two in FreeStuff at Renderosity.