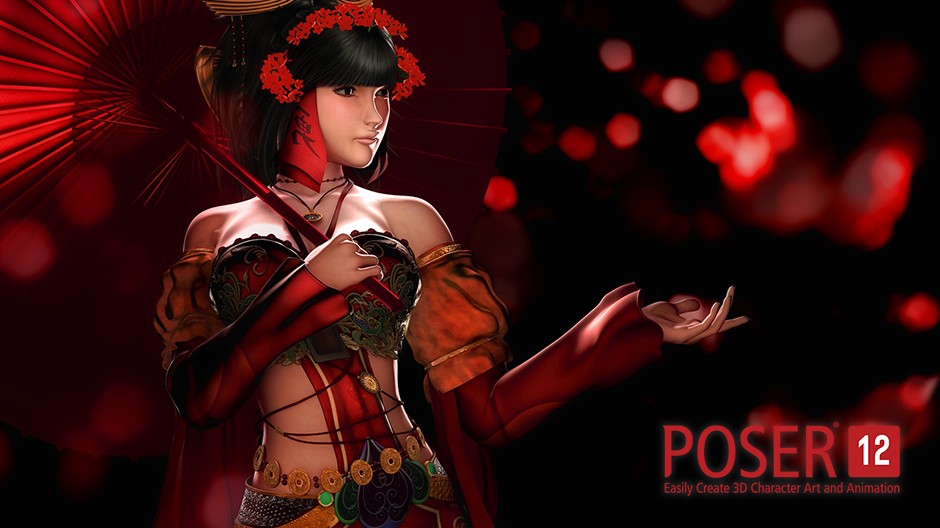 Poser 12 is available to "Early Access" users today with the release of the Windows version.

Early Access users can purchase and use Poser 12 prior to the release of Poser 12 for Mac. Just like with early access to video games, "Early Access" customers will receive upgrade notifications, possibly weekly, until features are finalized for the release of Mac version in early December.

Poser 12 can help every artist with a story to tell. Whether you're creating a portrait, a graphic novel or an animated feature, Poser has the tools and content to start telling your story today. And users can design a 3D world with gigabytes of included content.

Poser 12 includes a host of new features that allows users to make their imaginations reality.

Built on Blender’s Cycles 1.12 Render Engine, the new and improved SuperFly brings the power of physically based shading and rendering to Poser. Accurately rendering light the way it behaves in the real world makes it easier to produce hyper-realistic renders. Existing Poser users can choose to use the same familiar materials as for FireFly, or take full advantage of the SuperFly material system, by building Cycles or physically based shaders. GPU assisted rendering is supported for a variety of GPUs for shorter render times with better results, users will be able to harness the power of their GPUs when using the SuperFly renderer. Cycles supports GPU rendering with three GPU rendering modes: CUDA, which is the preferred method for older Nvidia graphics cards; OptiX, which utilizes the hardware ray-tracing capabilities of Nvidia's Turing architecture & Ampere architecture; and OpenCL, which supports rendering on AMD graphics cards. Multiple GPUs are also supported, unlike Iray that only supports Nvidia hardware.

Don't worry FireFly lovers. Because FireFly isn't a physically based render, it provides more creative freedom. It's not bound but the laws of physics. Users can continue to create with FireFly because it receives continued support in Poesr 12 for its excellent capabilities in non-photorealistic renders.

Another part of the improved SuperFly implementation of Cycles is Adaptive Sampling. This feature automatically adjusts the render sampling based on image noise. This allows the render to automatically focus on noisy areas that need more rendering samples.

The updates to SuperFly also include support for Optix hardware based raytracing. This can yield significant performance gains in render speed.

Implementation of Intel's new Open Image Denoise. OIDN is a AI-based, noise-reduction system that uses machine learning to detect and remove noise from SuperFly renders. When combined with adaptive sampling you can realize significant increases in speed and render quality.

Simplify applying materials in complex scenes with Poser's new simple Material tab. The old tab has been replaced with a new Material Manager. This new tab provides an easy-to-use interface to copy and distribute materials in your scenes. The drag-and-drop interface makes managing scene materials easier and faster.