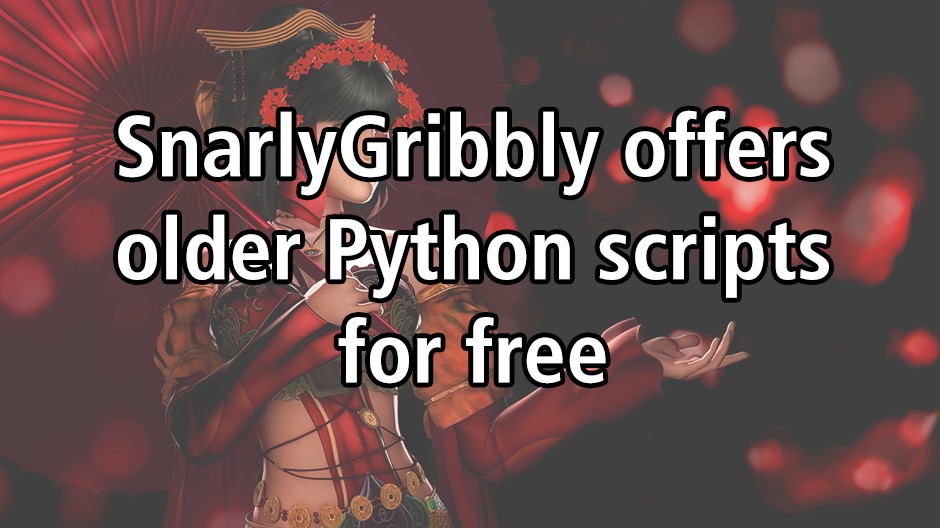 Over the years, Python has allowed Poser users to automate and customize their experience. These useful additions can automate the boring stuff, but also make things possible that are not directly achievable in Poser. For example, Python scripts can convert materials to poses or vice versa, delete lights, quickly switch cameras and more.

Many of the most popular scripts were developed by SnarlyGribbly. His scripts are used widely because they can automate tedious processes and even improve renders immeasurably.

To keep Poser secure and ready for the future, Python 3 and additional protections were added to Poser 12.

These improvements include automated installation support, which works the same as content products under Purchases tab. Now, Python scripts will appear in the Scripts Menu after installation. This also give Python developers the ability to verify that a Poser user has purchased the product before the executing app, as well as includes limits to the number of times a script has been downloaded and installed per purchase.

Thanks to these improvements, Python developers - Structure, FVerbass and wolfnom - have released new scripts.

Wolfnom's most recent upload into FreeStuff is a "Motivation Script for Poser 12," which shows a random message, ranging from motivational to funny, when executed. Wolfnom also teamed up with Afrodite-Ohki Cloth Presets Script for Poser 12 or Poser 11, which includes 28 dynamics controls presets for simulating different cloth behaviors.

Other developers, like SnarlyGribbly, are working to adapt their older scripts to Python 3 and new scripts are being released. While he's working on updating his older scripts, SnarlyGribbly is offering his legacy scripts for free on his website, cobrablade.net.

"Use of these scripts is at your own risk. Be sure to backup your work before using them," he said about his older scripts. For Poser 11 and earlier, SnarlyGribbly's most popular ones are:

• EZSkin 2 and 3: This replaces the shaders in the material room with new ones that enhance the appearance of skin (and other body features). "Of course, Poser is primarily concerned with figures, so it isn't surprising that this script is very much in demand," he said.

• Snow Machine 2.3: Covers your Poser scene with a layer of realistic snow.

For Poser 12, SnarlyGribbly has previously released new versions of EZCompile, EZDome 1.6, EZDome 1.7 (Experimental) and EZIcons. He is working on a new version of EZSkin 3.1 and warns that results may vary so backup your work before deploying this work in progress.