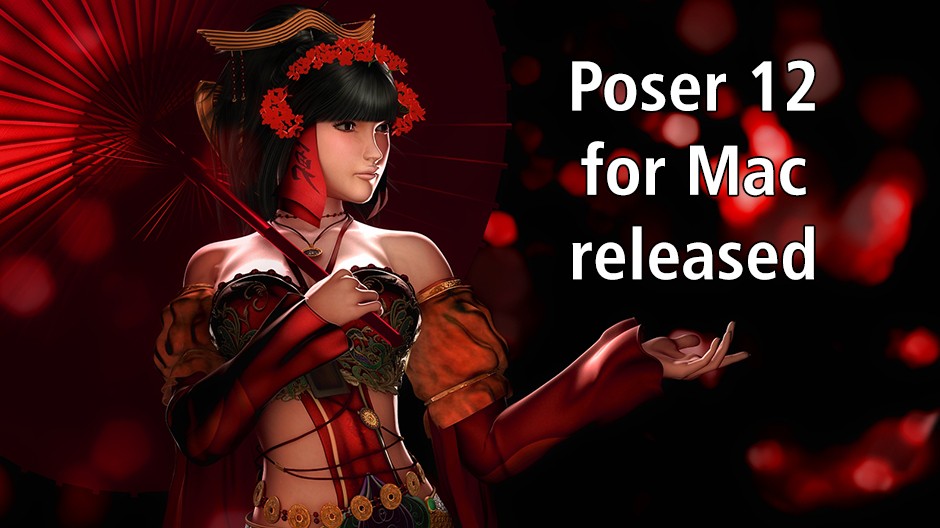 Poser 12 for Mac is available for purchase, according to Bondware Inc., Poser's parent company.

Mac users can expect the same great new features found in the latest Poser 12, including the upgraded SuperFly render engine, Python3 scripting and all the recent updates. Poser 12 also features updates to several core technologies that have evolved significantly over the five years since the last major Poser release.

Lead Poser 12 for Mac developer Larry Weinberg said Mac users will have access to the same new features that Poser 12 for Windows users have been using for the past few months, including the updated Cycles-based SuperFly render engine.

"Cycles is much faster and can produce better images in much less time than Poser 11," Weinberg said, adding developers are looking for a solution to bring all the GPU acceleration to Mac that Windows users enjoy.

Mac users can also access the software on Mac's most up-to-date operating systems, Weinberg said, adding Poser runs on both the Catalina OS and Big Sur OS, as well as with Apple's new M1 chip.

"We are not yet using the M1 natively, but Poser does run very fast now on the M1 chip under Rosetta 2 emulation of the Intel code," Weinberg said. Beta testing found no issues running Poser on Big Sur or with the new M1 chip. There are no plans to adapt Poser to Apple's iOS.

Mac users can expect the same great new features found in the latest Poser 12 for Windows, including all the recent updates. Poser 12 contains updates to several core technologies that have evolved significantly since the last major Poser release in 2014. This includes updates to the SuperFly (Cycles) render engine and the Python embedded scripting language.

The new version of SuperFly is based on Blender's Cycles render engine. Mac users will see improved render times, mostly from new Cycles algorithm improvements such as Adaptive Sampling that automatically cuts off computation when no further visual improvement is likely.

Another feature affecting render times is a PostFX option to denoise or smooth an image rendered with lower rendering settings. This can significantly reduce time requirements for busy images or animation sequences.

Simplify applying materials in complex scenes with Poser's new simple Material tab. The old tab has been replaced with a new Material Manager. This new tab provides an easy-to-use interface to copy and distribute materials in your scenes. The drag-and-drop interface makes managing scene materials easier and faster.

Finally, this version will mark the introduction on Mac of Poser 12's new library system that brings automatic installation of included and purchased content

System Requirements for Poser 12 for Mac